[an error occurred while processing this directive] Hi!! This entire page is dedicated to Mr. Neil Diamond....just because his music touches my soul.......

I have been asked many times just why Neil Diamond and his music means so much to me, and the answer is not easy. Twenty-five years ago, when I was a young bride I was first made aware of his unique ability to make me smile by my husband. He was in the Air Force and had been gone overseas for several months...one day a package was delivered and inside the box was a large plastic bag, and inside the bag I found three things....a note, one of his uniform shirts and a Neil Diamond record. The shirt still held the smell of his cologne and the note said simply to put on the shirt and start to listen to the record at 10:00 pm on Saturday night. Since it was only Wednesday, it was very hard to do as he asked, but I put everything back into the plastic bag that it had come in and waited. On Friday morning a letter arrived, and on the outside of the envelope there was a note that said do not open until 10:00 pm Saturday night. It was difficult to resist the temptation to just peek at the letter, but I did as I was asked.

Though twenty-five years have passed, and my husband left this world nine years ago, the love for the music has never diminished. Neil Diamond's songs have seen me through the birth of my two wonderful sons, the loss of my husband and mother, and the rebirth of love. Terry, Yrret came into my life four years ago, and as luck was with me, he loves "The Man" too!

I can remember that my husband could not listen to "Sweet Caroline" without having tears come into his eyes, and that "I am I said" became my personal favorite from the first time that I heard it. My two sons grew up hearing all of Neil Diamond's songs and have shared the joy of his music through our rough periods and happy times...they are now 25 and 22 and can still appreciate sharing Neil's music, although now they seem to enjoy a wider variety of music, I can't help but think that their music roots were started long ago as they each picked their own favorite Diamond songs to listen to. 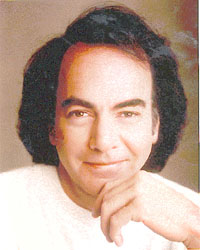 NetBanshee made this and many others..... please visit her site!